My dad wrote the following email and gave me permission to post it here.  (Our family originally hails from the South):

What [your aunt] calls “the Memphis factor” is much too widespread to be identified with only that city.  However, I do believe it’s especially evident in the South.  A good example occurred yesterday when a friend of a friend here in Little Rock had a “going away” party for a lady in her office.  One of their supervisors called the Little Rock Wal-Mart and ordered the cake.

He told them to write:

“Best Wishes Suzanne” and underneath that write “We will miss you”.

The attached picture shows how the cake turned out..

I’ll spare you my analysis. 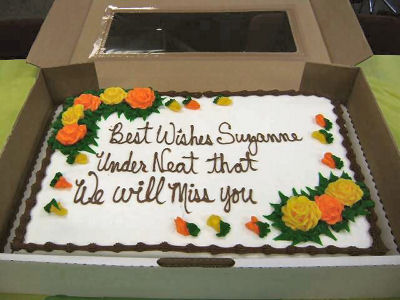 2 thoughts on “Only in Arkansas…”