[Note: Hinduism is very complex, and I am a beginning student of it, not an expert. I will do my best to explain what I am learning as well as I understand it. In doing so, though, I may inadvertantly present something inaccurately or incompletely if I have misunderstood it or not entirely learned it. The reader should understand that, if this happens, it is because of my lack of learning, not any desire or attempt to misrepresent Hinduism.]

We took two boat rides on the Ganges River here in Varanasi, one in the evening, and one starting at 5:30am. The Ganges is the most holy river for Hindus–they believe it to be a goddess. Hindus believe that if a person dies in Varanasi they are freed from the endless cycle of death and reincarnation and achieve paradise. There are two sites along the river where, day after day, the bodies of the dead are burned and their ashes thrown into the river. Last night, 13 bodies were burning at one of these sites when we passed by. Locals tell us that burning a person and throwing them into the holy river purifies and beautifies them. Paradise touches the river, so a person who has been cremated and thrown into the river enters paradise.

The owner of our guest house explained there are a few kinds of people whose families tie their bodies to a rock and throw them into the river whole upon death, rather than cremating them first. Some of these are:

Hindus believe that holy men and young children are without sin, and therefore are not in need of the purification provided by burning their bodies. In fact, holy men wear orange robes that represent the cleansing fire they have passed through to become holy men.

Hindus believe the second two types of people have been cursed by the gods and have bad karma, so it is worthless to try and purify their bodies by burning.

Here are a few photos from our boat rides: 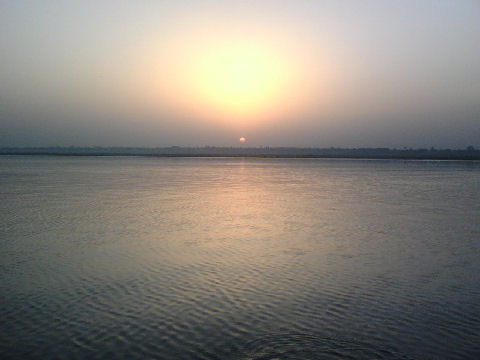 Fishermen working on the bank of the river 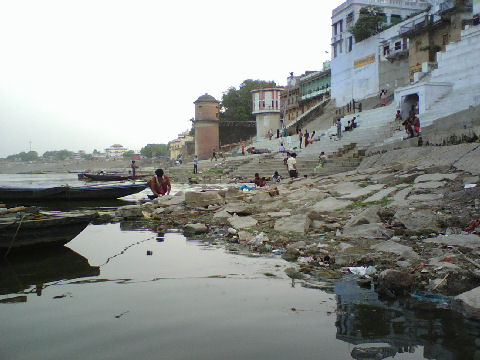 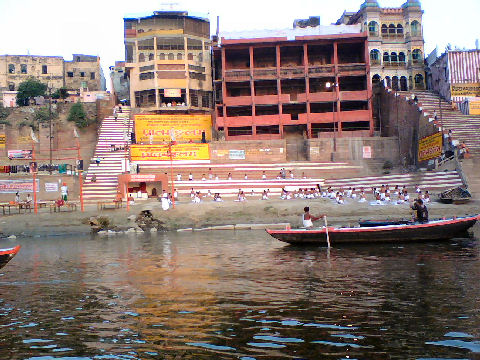 Many foreign tourists and spiritual seekers come to Varanasi 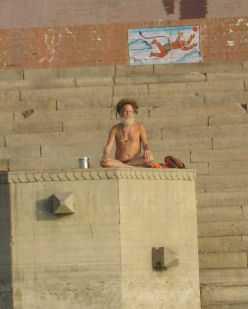 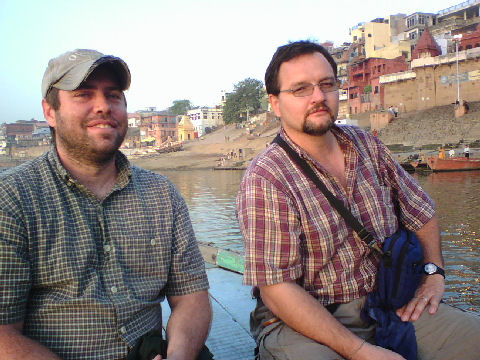 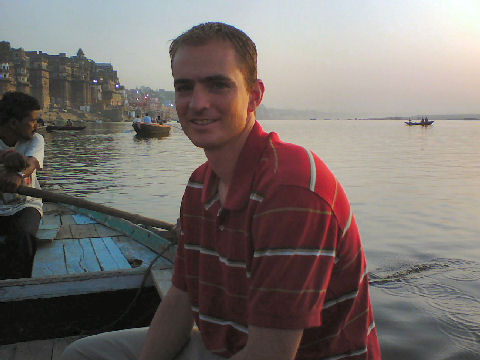 Varanasi has been leveled several times by invaders, most recently around 1750. It has many historic and impressive-looking buildings its citizens constructed shortly after the last destruction. 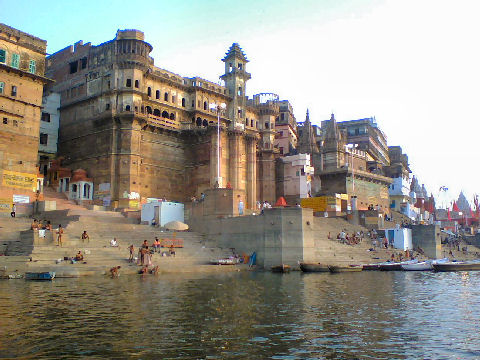 A Hindu temple along the river that is sinking 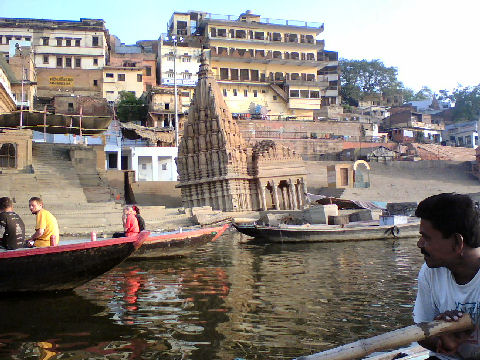 Hindus believe that bathing in the holy river cleanses a person of sin, so every morning, you can see thousands of people washing themselves in the Ganges. 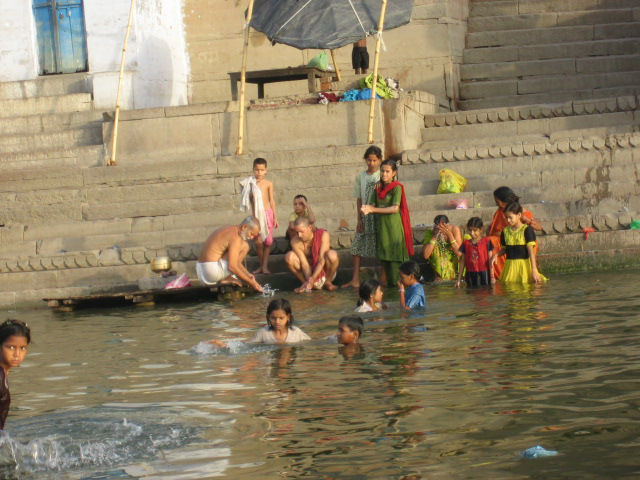 Every night, devotees have a time of worship of the river with music, fire, prayers, and other rituals 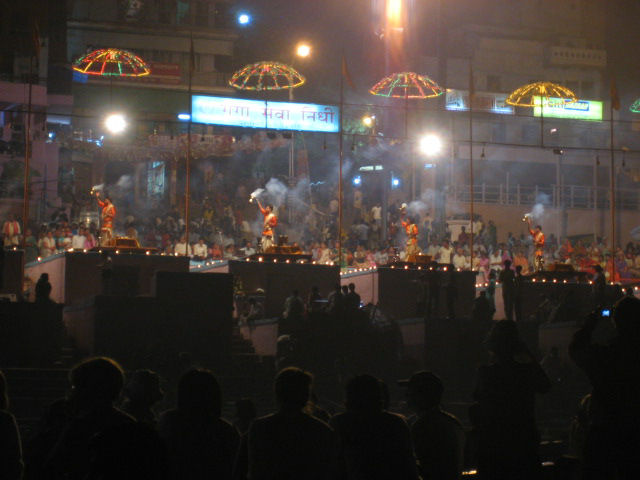 Men washing clothes in the river by soaking them and then slapping them on the rocks. We saw a few women washing clothes, too, but mostly men. I believe the colorful cloths laid out on the stone steps are silk, though I’m not sure. Varanasi is famous for its silk factories, which are primarily owned by Muslims. The owner of our guest house owns a silk factory, as well. Today he allowed us to go see some of his men hand-weaving the silk on a large loom, and then he took us to his store to display the finished products for us. Varanasi silk is multi-colored and very beautiful, and some of it has incredibly intricate designs. To make an ornate piece of silk the size of, say, a tablecloth, takes one man about two weeks of work. 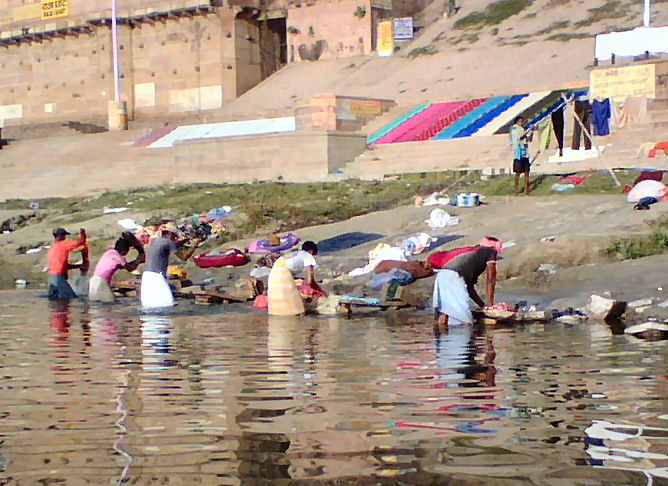 Other photos from the river: 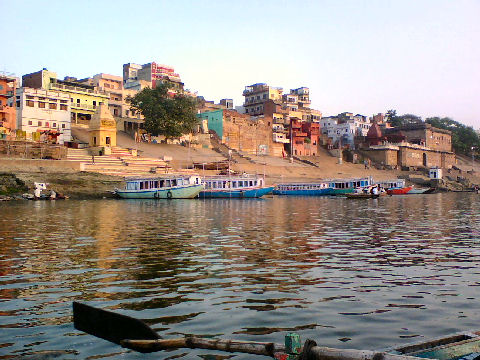 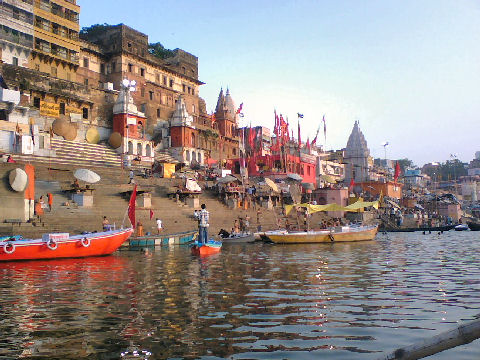 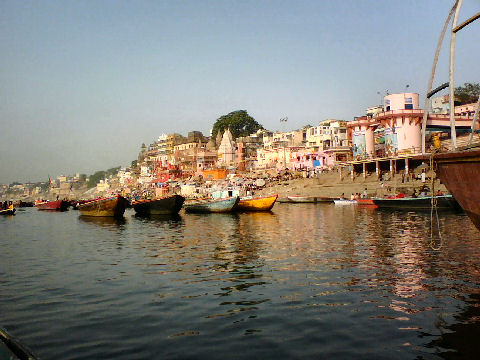