Time and internet connections have been difficult to come by the last few days, which has made it harder to keep my blog updated on our trip.

Monday was our last day in Chandigarh, and then Tuesday morning we caught a train back to Delhi, had a 3-hour layover, and then took an overnight train to Varanasi, in the state of Uttar Pradesh.

We enjoyed many good talks about theology and cross-cultural ministry with our Indian host during our three days in Chandigarh. He’s a big cricket fan, so we watched a couple of cricket games on TV while we were there. Cricket seems to be the most popular sport in India. They have a professional league, big stadiums, TV contracts, and players who get paid millions of dollars. Cricket is kind of tricky to figure out, but after watching a couple of games I was sort of getting a grasp of it. One type of cricket has matches that can last several days, but the professional league in India plays a different type of match that lasts 2-3 hours.

As I write this post, we are sitting in our guest house watching the news. A controversy is developing in the cricket league over the presence of cheerleaders at the games. Cricket teams are cheered on by scantily-clad, fair-skinned females that I think someone said are brought in from elsewhere, maybe the U.S. If that’s the case, I would think someone has to cue them whenever it’s time to cheer, because I can’t imagine American cheerleaders have the slightest clue about cricket. Anyway, it’s a good example of the dilemma non-Western cultures face. They have a much stronger sense of decency and modesty than Western cultures have, which causes them to resist our culture on one hand, while being allured by it on the other. The indecency being imported from the West is causing many non-Westerners to have a deep resentment towards us. This can help us understand their resistance to Christ, because they associate the United States with Christianity just the same way we associate India with Hinduism and Saudi Arabia with Islam. Would you want to become a Christian if you thought Christians were immoral heathens responsible for exporting their sin to your country?

Sunday afternoon, Grant, Rob, and I hopped on a man-powered rickshaw for a short ride. Turns out that kind of rickshaw isn’t really designed for three full-sized men. About five tall, young Sikh guys in turbans were walking in front of us when we all squeezed onto the rickshaw. Grant and I had Rob’s legs hanging on us, and the poor rickshaw guy had to give everything he had to made the pedals turn. When the Sikh guys turned around and saw us, they busted up laughing and whipped out about four camera phones to take pictures of this strange spectacle. We were a little worried the rickshaw was going to fall apart, but it held up, the driver survived, and we gave him a little extra for his efforts.

I had never ridden on a sleeper train before, but it was really comfortable, and I slept great. Thieves are apparently a big problem on those trains. A couple of our guidebooks mentioned chaining up your personal belongings on the train. We wondered if that was overkill, until we saw guys selling chains and padlocks on the platform before the train left. We bought a couple, locked everything up, and didn’t have any problems. Here are a few train pictures: 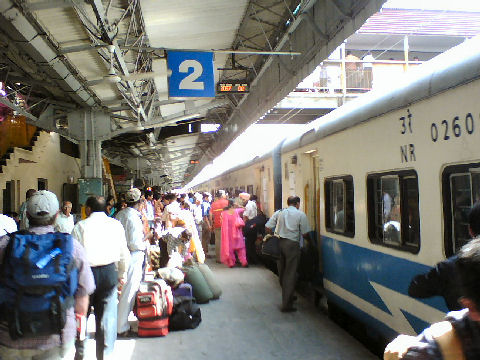 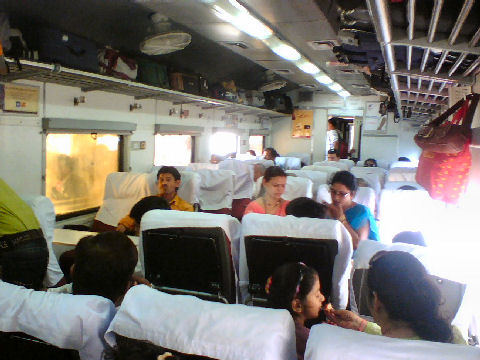 Our sleeper car. It had little groupings of four beds (two bunks), each with its own curtain to close it off from the aisle. 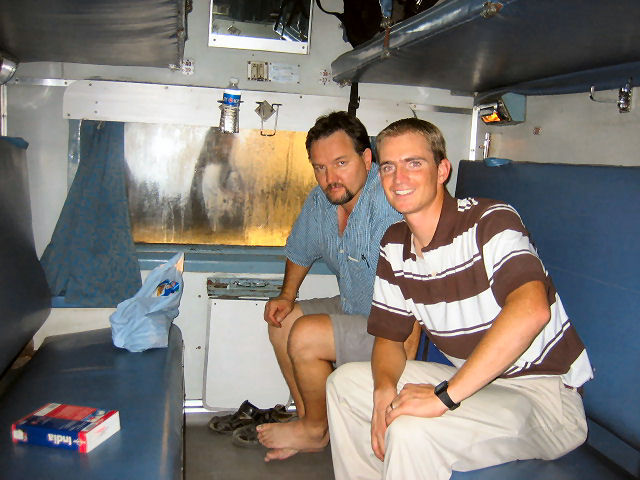 Trains at the station: 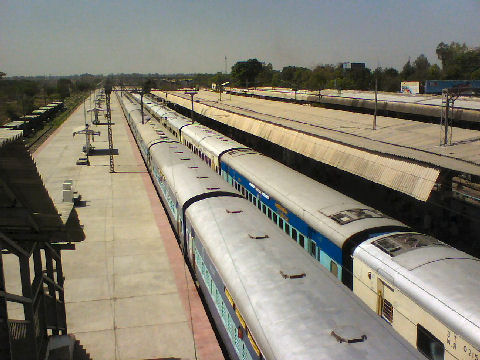