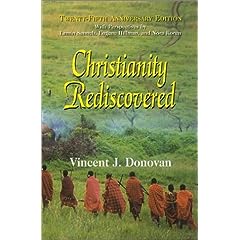 Since I intend to post a few things from Vincent Donovan’s book Christianity Rediscovered, I figured I should go ahead and give an official plug for the book.

First allow me to share an excerpt from Donovan’s introduction that may pique your interest:

…Suppose you were a missionary and you realized how questionable the whole system was. And yet suppose you believed in Christianity, believed that Christianity had something to say to the world that is pagan–for that is what it is, more than three-quarters pagan. What then? What would you do?

Maybe you would do as we did, begin all over again from the beginning. That means precisely what it says, starting from the beginning, with, perhaps, only one conviction to guide you, a belief that Christianity is of value to the world around it. That is presumption enough. Beyond that, no preconceived ideas either as to what Christianity is or what paganism is. What it means is a willingness to search honestly for that Christianity and to be open to those pagan cultures; to bring Christianity and paganism together and see what happens, if anything happens; to see what emerges if anything can emerge, without knowing what the end result will be.

The actual carrying out of such a quest has been an adventure, a journey of the mind and of the soul, a disconcerting, disturbing, shattering, humbling journey. I would like to invite the reader to go on that journey with me. But before commencing it, one would want to have the same open-mindedness toward it, with no convictions beyond the one that Christianity is something of value; no preconceived notions about God, salvation, Christ, the meaning of being a Christian, the church, the sacraments, the liturgy, the priesthood, or anything else traditionally associated with Christianity. Without such an openness of mind on the part of the reader, this book would make no sense.

I highly recommend this book to those who are making disciples and planting churches in a cross-cultural context. Most of you immediately think of foreign missionaries when I say that, and they make up a good part of who I am writing this to. But I think in a country like the United States, the church will do well to realize (and is realizing more and more) that a good percentage of the ministry we do within our own cities is cross-cultural.

I recommend Christianity Rediscovered to you cross-cultural ministers because Donovan brings a fresh perspective. He was a Catholic, so his thinking breaks the mold of a lot of what those in evangelical circles are used to being exposed to. He was also a practicioner. He wrote as one who got his hands dirty working and sometimes failing, learning his lessons week-by-week as he brought the gospel to the Masai villages of East Africa. He was not a theoretician, isolated behind the walls of academia.

Theologians can also benefit from reading Christianity Rediscovered, because our theology is richer when informed by cultures besides our own.

If you’re interested in picking up a copy of the book, here it is on Amazon. If anyone does read it or has read it, I would love to hear what you think.