Who can help me with information on inexpensive ways to generate electricity for a household?  If you know something about this or can point me to a good resource, please comment!  Read on to hear why…

In praying about next steps recently, I sensed God leading me to put more effort into connecting with people on the outskirts of our town who have ties to villages.  I felt I wasn’t supposed to take on any new projects (water filters, solar dehydrators, and the like) until I had better relationships with people in need and could more directly respond to needs they wanted met.

On that premise, late this afternoon I headed out to a community about a half hour walk from our house, built on an old airstrip.  The community came to be about three years ago when a number of village families were invited to take small parcels of land and build houses on them.  They did so, constructing one-room houses out of wood and sheets of corrugated tin.  These humble dwellings line either side of what was once a working airstrip in our town, now a gravel runway with weeds poking through it. 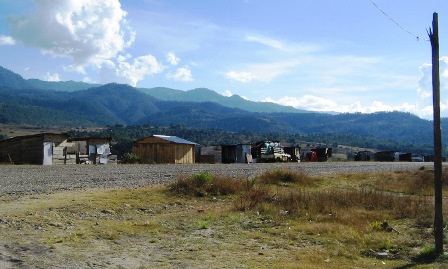 The airstrip community is an intriguing place, strategically.  Its families come from a number of indigenous villages and speak native dialects.  We (and many missionaries) have found displaced people in difficult circumstances to often be more open to the gospel.  The community is poor, meaning community development has an opportunity to make a more significant impact there than in other places.

I went out with no plan other than to try and connect with people.  I figured I’d let them know that God brought me to the region to come to know Jesus better alongside others and to spread the love of Jesus in any way I can.  Then I’d just see what happened.  Arriving at the airstrip, I saw a couple of guys loading wood into the back of a truck at one of the first houses, so I figured I’d see if I could lend them a hand.  As I got closer and called out a greeting, I recognized both of them as men I’d met last summer when GFM was doing some English classes up there.  (Carl and Lisa, students in the 2008-09 Mission Training School, were the first ones to begin building relationships in the airstrip community, which opened the door for our further involvement.)  The two men recognized me, as well.

We started talking, and in the first five minutes one of the guys asked if I know how to generate electricity for a home.  The families at the airstrip had been stealing electricity from some nearby lines, but they got cut off and fined and are now without electricity.  He explained several ideas he’d heard of involving windmills, solar panels, and car batteries.  I don’t know how to generate electricity for a home, but I told him I would look into it if they would help me make something once I found a design.  He readily agreed, saying to let him know what I found and then he would get people in the community together to chip in money for the project and help work on it.

After a half-hour conversation, he offered me a ride back to town.  I accepted, and on the way back we got into spiritual matters.  I mostly just asked questions and let him talk this time around.  He belongs to a sect based out of Guadalajara called Luz del Mundo.

So now I need some good ideas for inexpensive home power generation!  Does anyone know of anything?  We always say that our supporters back home are just as much a part of the team as we are, we’re just field staff, so here’s a bit of a unique way to participate in the work down here!  I’m looking forward to hearing from some of you.

P.S. I don’t have a photo of the airstrip community, but are there any GFMers reading this who have one they could pass along to me?  If so, I’ll add it to this post.  Update: Thanks to Nick and Sarah for providing the above photo.

Update 05 June ’09: Read about my following trip to the airstrip here.

18 thoughts on “Saturday afternoon trip to the airstrip”