Monday I went to a village to investigate an area for a man I’ll call Josh who wants us to drill him a well. I enjoyed connecting with him. Josh is the kind of guy we want to help with our well project.

Josh has a wife and two young boys. When his youngest was a year old, he left them for several years to work in the United States. He returned with a bit of money in his pocket, but his family is still fairly strapped financially. He doesn’t want to go to the U.S. again and leave his family. If he can’t find a way to make a better living, though, he’s afraid he’ll have to go.

His village has a lot of underground water, but very little on the surface. A spring used to feed the water lines running to the houses in the village, but it is now virtually dry. During the six months of the year that it doesn’t rain, his family has to walk a kilometer away to bring water. While I was there, his aging father returned to the house with five gallons of water on his back, hung by a strap on his forehead.

Josh wants to help himself and his parents. He thinks if they could just have a good water source, he could work the fields and produce enough to support the family. Then he would not have to go to the United States again. I told him I thought this was a great idea. Imagine his boys spending the most formative years of their lives without a father and his wife struggling to make ends meet in difficult circumstances.

Josh and I had a nice talk on the ride back to our town. He thinks about ways to help people around here. He feels like people could better provide for themselves if they just had a little startup capital to get small businesses going. He had even thought about trying to earn enough money in the United States to give small, low-interest loans to people like himself for starting businesses.

The conversation stirred me, because we share the same burden. We are trying to establish the well drilling business to employ local men and raise startup funds for more businesses. I can definitely see us establishing a microloan bank at some point to help local entrepreneurs get up on their feet. I don’t want to keep seeing families destroyed and churches struggling because of men leaving for years at a time to work.

Will you pray about how God would use us in the transformation of these circumstances?

This photo isn’t great because I just snapped it for reference, but this is Josh’s parents’ house where we would drill the well. 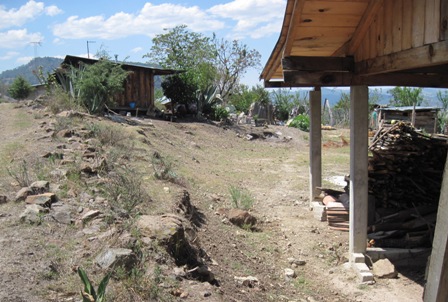